Michael Stewart: Is there an intended duality at work in the title of Lamentations and Praises?

John Tavener:  I call the work Lamentations and Praises because there is an esoteric concept in Orthodoxy known as is ‘Joy/Sorrow’. The Lamentations/Praises are part of an Orthodox Service that takes place on Good Friday and they are neither joyful nor sorrowful but somewhere in between. I think that the only branch of Christianity that recognises this kind ‘esoteric dimension’ is the Orthodox Church. In the Latin Western world this dimension seems to me to be totally lost, either through of a veil of prejudice and deformation, or because of the autocracy of the Latin mind and the Latin West.

M.S. Is that because the Latin West has a more cerebral view of Christianity?

J.T.  Yes, I think so, cerebral and more scholastic and always trying explain everything because of a lack of this esoteric dimension. I always think of Christianity as an Oriental religion that has been dragged by the heels into Western ways of thinking, and by rationalising it or denying the esoteric aspect they loose so much. In a some ways I think that Christianity has never really been truly understood by the West except perhaps by the Celts.

M.S. This ‘Joy/Sorrow’ concept strikes me an a particularly important concept in your music. I have noticed in many of your works, even as far back as The Lamb.

J.T.  Yes, I think it is. It is the esoteric aspect again that attracts – because it is neither one thing nor the other. For instance, if one looks again at the Latin services for Holy Week compared to the Orthodox services for Holy Week – the Latin Service is extremely black followed by what seems to me a very empty celebration at the end. In the Orthodox Church the Resurrection is always there – it’s always part of what is going on – therefore you get the joy/sorrow all the time. Again, in the Orthodox church, when Christ is on the cross he is shown as utterly serene, whereas in the western church he shown in agony.

M.S. The demands that you place on the performers with regards singing style and mircotonal inflections etc. are quite severe. Do you worry that these may limit performances, or that performers will be less inclined explore areas of your music?

J.T.  Well the problem with that is one would stay then in a kind of sterile western environment where you cannot charter new territory. One of things that is the most extraordinary about the 20th and 21st centuries is that we have a vast knowledge of tradition that we did not have before and by exploring it we keep those traditions alive. Artists like Blake or Yeats – although they were both basically Christian – both knew about and studied Vedantic and Hindu scriptures and that is what makes them so remarkable. In Yeats for instance there is a huge dimension that comes over in those late poems because he was immersed in so many different traditions.

M.S. How important is the dramatic aspect of Lamentations and Praises?

J.T.  Well, in some respects it is more liturgical in action I think. The only similarity would be something like Britten’s Church Parables. The trouble is they start off well with the liturgical singing in plainsong but very quickly move into a kind of subjective world of Britten. My hope is that the Lamentations and Praises maintain a traditional and liturgical element throughout. Also, the dramatic aspect of the piece is neither a personal opinion nor an interpretation, because if you start interpreting sacred themes I believe you are already violating them. 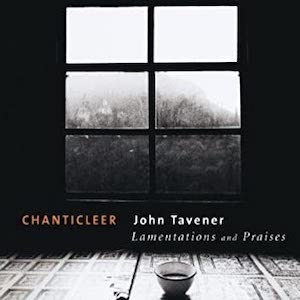